I got a fair bit of maple syrup from my trees last year – read the post from then here: Maple Sugaring 2014. Turns out that the first tree I tapped by accident (I drilled a practice hole in the first maple tree I walked to and it started dripping sap immediately so I put in a spile), wasn’t actually a sugar maple. Once summer came around I cautiously identified it as a Black Maple. But, hey! it still produced a whole lot of sap and yummy maple syrup.

So this year I tapped three trees I knew were sugar maples. I got a new kind of spile from Amazon: 5 Maple Syrup Tap Spile Kit 5 Taps + Drop Lines 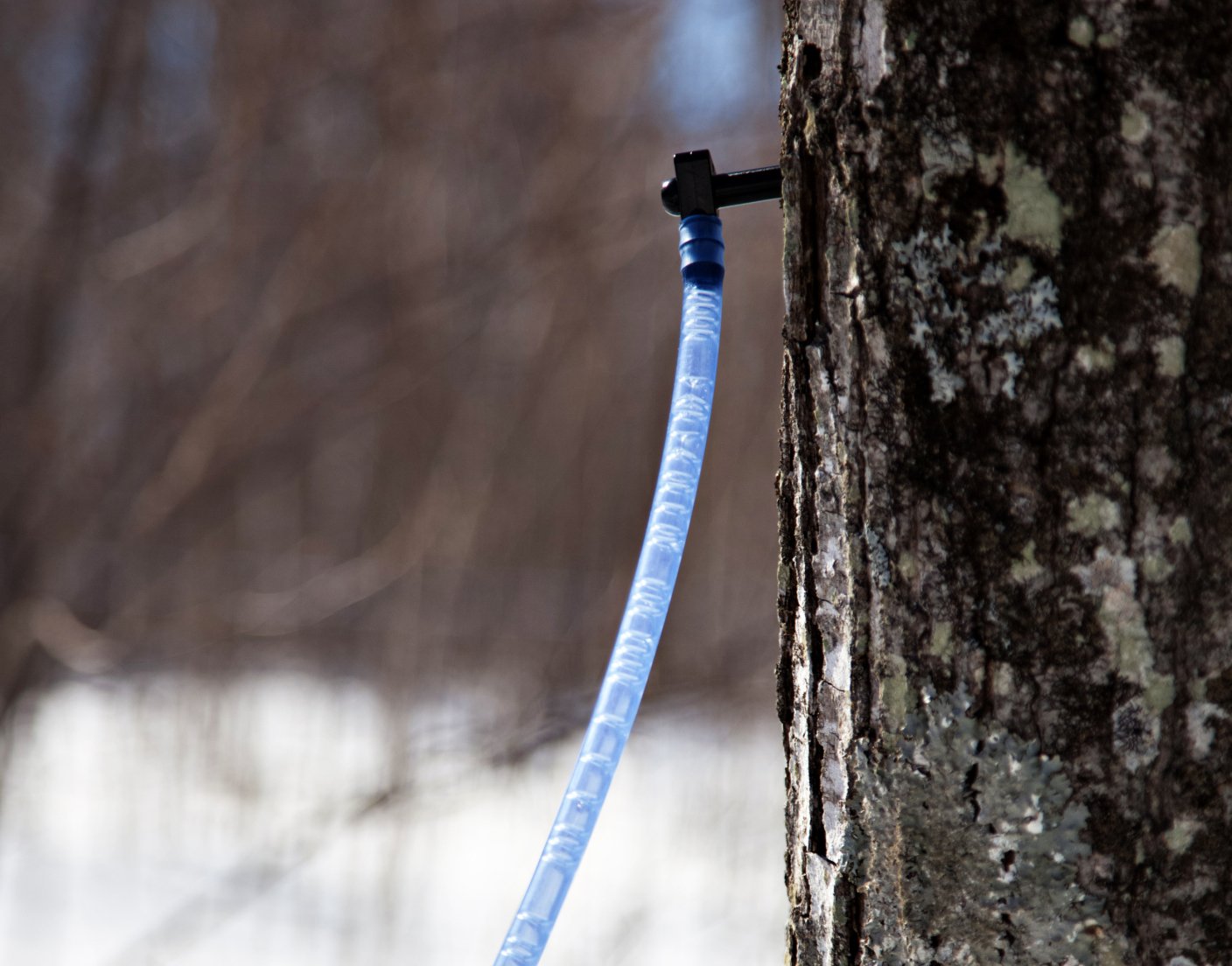 I just dropped the lines into some clean 1 gallon milk jugs – this is an improvement on the sand buckets we used last year ;-).

A few days later the right temperatures were happening (below freezing at night, above freezing during the day) and the sap started moving, and straight into my bucket and jugs.

In my mind, making maple syrup consists of two phases: 1) reducing water content and 2) caramelising the liquid into syrup.

This year I reduced water content by partially freezing the sap and getting rid of the top ice. The lower liquid has the sugary fraction I want. I also used a deep tray over two burners instead of a single stockpot. This gave me a bigger surface area from which to evaporate the water. Out of necessity I didn’t reduce the sap over a romantic fire outside in the snow. Instead I gave my pan sporadic bursts of bringing the sap to a boil. During the times I had to dash off with children I let the pan sit open and further evaporation would get rid of even more water. Then whenever I came back I would fire up the stove again and heat the sap to boiling. One thing I learned this year is to reduce the pot size to fit the liquid. It’s really hard to get 1/2 cup of syrup out of a big tray 🙂

I don’t have a hygrometer to measure water content, but instead just use a thermometer. I’ve noticed that sap will happily boil away at about 210ºF for hours and not go above that temperature. Until the water content becomes low enough. Then it fairly rapidly increases in temperature to 230ºF, which is the required temperature for the caramelization reaction to occur. the most obvious VISUAL change is that the liquid suddenly doesn’t bubble like water any more. Instead there are lot of little bubbles that start to rise out of the pot, unless you add the little bit of butter recommended in the books.

And here to talk about the science of caramelization – from The Science of Cooking:

Caramelization and caramels are not the same.

Yes, it’s a little bit confusing, but you’ll get it in a minute.

Caramels are the chewy candies you are familiar with. They’re made by cooking sugar, cream, corn syrup, and butter to 245° F. Their brown color comes from a reaction between the sugar and the protein in the cream. This reaction is called the Maillard reaction, after the French scientist who discovered it. The rich brown color of toasted nuts and barbecued meats also comes from the Maillard reaction.

Put simply, the Maillard reaction occurs when part of the sugar molecule (the aldehyde group, if you must know) reacts with the nitrogen part of the protein molecule (an amino group). The resulting series of reactions is not well understood even by food scientists, but it leads to the brown color and many flavorful compounds that are yet to be identified.

Caramelization is what happens to pure sugar when it reaches 338° F. A few tablespoons of sugar put in a pan and heated will eventually melt and, at 338° F, start to turn brown. At this temperature, the sugar compounds begin to break down and new compounds form.

As with the Maillard reaction, the details of what happens during caramelization aren’t well understood. But the results are appreciated all the same. For example, caramelized sugar is often used as decoration on fancy desserts. Try caramelizing sugar yourself—it’s easy!

My cunning plan is to have a science-y project ready each day for when the kids get out of school. We have been watching way too much television recently. Today I just looked through a couple of the 1001-fun-things-to-do-with-science type books we have.We talked a bit about how friction helped the shapes to climb up the string. I’ll post the video on Facebook.

Found this in The Usborne Big Book of Science Things to Make and Do:

I used a cereal box as a thin cardboard and free-handed a couple of shapes: a honey bee and a lady bug. First reaction from Jen was: “That’s nice, Mama”. I didn’t know 5 year olds could sound THAT sarcastic – sheesh.

Alex had some fun finishing the bee.

And this is what the backside looks like – two 1 inch lengths of straws taped on to run the yarn through, and a coin taped on to give it extra weight.

Alex has used the excuse “It’s for science” and “Stand back, I’m going going to make potions” for a while. Here he is doing an actual science experiment: cleaning coins in vinegar.
1/4 cup vinegar with 1 teaspoon salt.