What happened to playgrounds as neighborhood hubs? – a guest post by Jean Oram

As the national nonprofit KaBOOM! kicks off its 2012 Summer Playground Challenge — which challenges families to explore as many playgrounds as you can this summer and offers prizes for your playground visits —  playground lover Jean Oram shares how people can revitalize playgrounds and bring them back as neighborhood hubs.

Playgrounds used to be a social hub for neighbourhoods, particularly in the summer, but are less so nowadays. However, you could argue that playgrounds are even more important now when it comes to building healthy, playful neighbourhoods. With tall backyard fences and attached garages, neighbours are less likely to meet each other or their kids. Do your neighbours look out for your kids? For your house when you are away? Are they someone you know well enough to call on in an emergency? Playgrounds can serve as a way for neighbours to meet each other, unwind, and socialize. Not to mention all the great benefits to the kids playing in them! Below are some ideas for ways to revitalize playgrounds as neighbourhood hubs:

How Can We Revitalize Playgrounds and Bring Them Back as Neighbourhood Hubs?

But the biggest thing we can do for playgrounds and our kids is to use local playgrounds this summer. So, let’s get out there! I’m the one inventing playground fun such as Under Whales (Under Ducks on the swings, only more swooshy). Come say hi. I’m always looking to meet other moms and dads.

Jean Oram is a mom, writer, skier, hiker, and playground lover. Her daughter loves the more challenging playgrounds while her son is most content in the baby swing. You can find her playing on her blog at www.itsallkidsplay.ca as well as pinning fun and games (literally) on Pinterest, sharing fun stuff on Twitter as @KidsPlay, and on Facebook. Let’s play! Get motivated to visit more playgrounds with your kids this summer by joining the 2012 Playground Challenge! The three top Challengers will win a trip for two to DC and all participants can win great prizes throughout the summer.

The water has been turned on at North Point Playground. End of message

If you were wondering about the semi-naked children running through the sprinklers this morning, that was us 😀 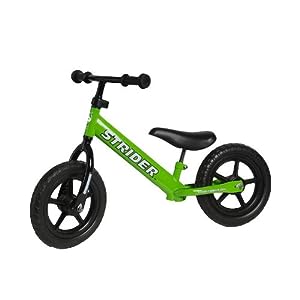 Last summer, Alex finally after much pleading and lots of bribery decided to give up diapers. Nothing had worked – he preferred diapers over chocolate, stickers, toy cars,… BUT then he saw the bike: Strider PREbike Balance Running Bike

in a magazine and instantly got on with potty training. Thirty days of choosing to wear underpants later, I ordered the bike, to discover that they had sold out in the entire country.

Well, we went to all the local bike shops and tried out various helmets. That took up some of the waiting time. When it finally arrived, he was actually a bit scared by it. And it took a few weeks to really get him to be brave on it. In the last few weeks he has wanted to go over bumps and do little jumps 😀 (proud and terrified mama).

Then last week we ended up at Greenwood Park playground, which is exceedingly nicely situated directly across from the Stone Zoo with a big parking lot to access a corner of the Middlesex Fells. I used to walk my dogs there. We played at the playground for over an hour and then both Alex and Jen wanted to check out the forest. Alex took his bike. Jen walked and I stayed in the back and encouraged them to look for rocks and sticks, for a craft project I’ve had in my mind for about 33 years (ah childhood memories).

Well, we didn’t find the perfect rocks, or the perfect sticks, but we looked. And we saw. I thought it was the most brilliant outing ever, since it was the first time that both had actually paid attention to outside. I used to do a lot of hiking and climbing in New Zealand and always found it very peaceful to be outside. And I must admit, I’d been somewhat discouraged when Alex repeatedly declared in the past that he just wanted to stay home and play with cars and trucks.

But they both really liked it. Jen may have even burst out crying when I told her that we didn’t have enough snacks and water to last us all day. But we were out in the forest for almost an hour, and both really wanted to go back the next day with lots of snacks. 😀

And incidentally, the playground has been cleaned up for spring and has new woodchips – woohoo!

Apologies for the long absence. Turned out that that cough I had was a nasty virus that did a number on my kidneys, and even though I think I have averted kidney failure, there have been lots of medical issues going in my life.  Things have been slow. I have been prodded and poked and scanned.

We have been going out to some low key playgrounds in this tremendously non-snowy winter, ridden bikes, gone on hikes, and done a lot of crafty stuff. I will be collating all those in the next couple of days, so that I can keep track of our adventures and milestones.

The Rebuilding Rounds project is coming along very well, but you can read the newsletter for that in the previous post and at http://www.RebuildingRounds.org 🙂 and for mysterious reasons, not many people have hired me to do their marketing at http://www.GuidingLightMarketing.com, though everyone and their dog has wanted a website. And I still beat the overseas budget outsourcing in price if you know someone who would like a nice website made by someone local (http://www.GuidingLightWebsites.com)

I moved the whole rebuilding AP Rounds Playground to another website – it’s is now on:

so go forth and click on that link for all the up-to-date information on how to donate, volunteer, sponsor, and otherwise support a great project.

We went to Greenwood Park opposite the Stone Zoo recently to burn off energy pre-doom-and-gloom-it’s-the-end-of-the-world because Hurricane-Irene is headed this way. It was lovely.

Alex and Jen are finally getting to the age where they can play on a playground without constant help, so I actually had some time to take pictures. And now, miracle of miracles, Jen is having a nap through Thursday afternoon’s thunderstorm. This means that I can actually do some writing.

So, Greenwood Park is probably the nicest playground in Stoneham (though we’re going to fix that, right?). It is the playground located near the zoo just on the edge of the Middlesex Fells Reservation. There is a pretty view of the Fells Reservoir and a large parking lot, but don’t forget to bring along the insect repellent.

The reason we keep on coming back to this playground is that it is designed for children under the age of five. There are two main structures: My children have been using the one designed for children under the age of two for a while. That structure is very safe, low to the ground, features a short little slide and also a wheel. The whole thing works for crawlers and cruisers.

The other structure is for the 2-to-5-year-old kids, but teeny and fearless Jen has being crawling up that for a few months now. The tunnels slide is a hit and very safe. I used to have to accompany Alex on that slide (the times when I was a bazillion months pregnant with Jen were especially fun). Now both Jen and Alex race up the stairs to slide again. That structure is pretty safe, but does have some openings for kids to fall through. I suggest caution for parents of reckless kids, but most will understand.

The playground also has the biggest sandbox ever! The sand was hard packed and had quite a few large stone in it. Nothing a good sifting and some new sand wouldn’t fix.

We didn’t make it to the swings, the circle of sit-on teeters, the large field, or the walk in the forest, but we got in a solid 2 1/2 hours of running before it started raining.

This post was first published by the Stoneham Patch at http://stoneham.patch.com/blog_posts/pre-hurricane-fun-at-greenwood-park

Alex on the ‘big-kid’ structure

Alex in full flight off the big kid structure

This playground is at the north end of the Cambridge Common, which is just north of Harvard Square. Our last visit had been in fall, after all the water sprinklers were turned off. So we went again recently:

Alex and Jen playing with the sprinkler shower

Alex and pulley on the physics platform

Alex by the physics platform

My husband and I took our 17 month old son to this playground for the first time today. It is really a lovely park. It is very clean and there are a lot of benches including a gazebo with picnic tables where you can sit and enjoy lunch or a snack. There is plenty of parking and lots of room for toddlers and older children to run around. The only thing is that the play structures are all wood, so watch out for tiny fingers with tiny splinters. The sand box could use a little bit more sand too, but other than that it’s a nice little park. We will for sure be visiting the park more often once it starts to warm up a little bit.

Review: Fenced off from the road and parking lot, but no gates at the entrances, and the playground is open to the basketball courts and playing fields. One toddler structure, and two infant/toddler swings but overall, this playground is best suited to older preschoolers and older children. Not great for twin toddlers with only one adult.

Parking for the playground is located off of Mill Street.

Review: Lots of fun for young twins, but only with a helper. The fully fenced, gated playground is huge and keeping keeping track of multiple toddlers can be difficult if they take off in different directions.

Hours: Public Park open ’til dusk
Fees: none
Parking: large parking lot, but it fills up during baseball games.
Accessibility (for wheelchairs, etc.): wide gate and brick pathways make it easy to navigate double strollers and wheelchairs.
Fences/Gates: fenced and gated, two gates, but many parents and children leave them standing open.
Structures: 3 structures, under 2, ages 2-5, ages 5-12
Swings: 4 infant/toddler swings, 1 accessible swing, 4 standard swings, 1 tire swing
Sandbox: none
Tables and Benches: several benches inside the fenced playground, picnic tables and grills just outside the playground
Ground Cover: wood mulch
Sun/Shade: no shade, very hot in the summer
Restrooms: yes, but only open limited hours
Refreshments: yes, nice refreshement stand but only open limited hours, also water fountain available.
Restrictions:
Safety Concerns: the play area is huge and it is very hard to keep track of more than one toddler if you are alone, the older children are often very rough with the little ones.
Playing Fields: baseball and much more
Other Activities: wading pool near the playground, but only for Burlington residents